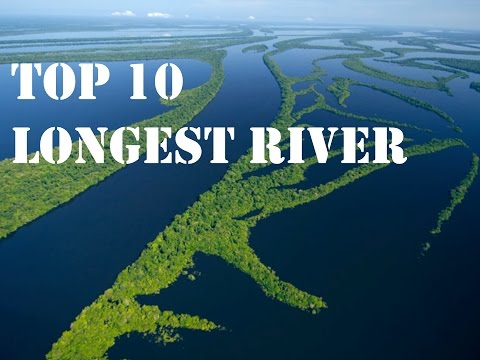 The List Of Top 10 Longest Rivers in the World

A river is a naturally flowing watercourse that flows towards the ocean, sea, lake or other rivers. We have listed the 10 longest rivers in the world, along with their lengths and countries of origin.

When trying to find the top 10 longest rivers in the world, there are two key factors you should consider:

Are you interested in learning more about the longest rivers around the globe? We have a comprehensive overview and write-up of 10 of the longest and most extensive rivers in the world, as well as the country and length of each of them.

These points make it virtually impossible to agree on a length for any river or stream.

Until recently it was generally accepted that the Nile held the title of the longest river, but in recent years some studies have added the adjoining Para estuary and tidal canal to the length of the Amazon River, and suggest it is thus longer than the Nile. While most people still believe that the Nile is the longest river on the globe, there are now questions!

The Top 10 Longest Rivers in the World

This list includes the top 10 longest rivers, along with their lengths and locations.

The border between Russia’s Far East, China and Northeast China is formed by the Amur River. It winds eastwards for 2,824 km. Its total length is 4,440 km, including its source river Argun. Heilong Jiang is the Chinese name for the Amur, which literally means “Black Dragon River”.

The river is fed principally by the monsoon rains that fall in summer and autumn, leading to annual flooding from May to October, and home to around 100 species of fish including 20 species of indigenous carp, Siberian salmon, and Chinese perch.

The Congo River is perhaps Africa’s most mysterious and longest-running river. It flows through the virgin rainforest, which is inaccessible to the rest of the world.

Given the global deforestation of the rainforests, the whole Congo River and basin region is considered critical to the ecological health of the world. The Congo River, which crosses the Equator twice as it travels from the Southern DRC to the Atlantic Ocean is a water source for forest-dwelling species such as gorillas, forest elephants, lions, hyenas, antelope and more than 600 species of fish.

The Ob River, the largest river in Russia, is located in Western Siberia. It merges with the Irtysh River, from Kazakhstan, to create the Orb Irtysh. The Ob basin covers a large portion of Western Siberia and includes semi-desert, grassland forests, plains, and forests.

The river is frozen for half of each year, and through the rest of the year is heavily used for the transportation of people and goods.

The Yellow River, China’s second-longest river and sixth in length worldwide, is approximately 5,464 km long. It flows eastward to the Bohai Sea from its source in Qinghai Province, Western Cina.

The Yellow River basin was once the home of ancient Chinese civilization and the most prosperous area of the country. There have been many large-scale natural disasters that have occurred along the river over the years, including floods that killed more than a million people and major shifts in river flow. Modern dams have almost eliminated serious flooding from the river.

Numerous nomadic tribes, such as the Ket or Yugh, have lived along the banks since records began. The Yenisey is home to the Taimyr, which is the largest reindeer herd anywhere in the world for winter grazing.

The Yenisey sadly suffers from pollution caused by radioactive discharge from a plutonium factory in what is now the city of Zheleznogorsk.

It is home to over 145 species of amphibians, reptiles, and 260 species of fish.

The third on the list is China’s Yangtze, which is the longest flowing river in Asia and the longest that flows completely within one country. The Yangtze, also called Chang Jiang (“Long River”) in China, is also known by Da Jiang (“Great River”) or Jiang (“River”) in other countries.

The river flows 6,300 km through China from its source on Tibet Plateau to its mouth at the East China Sea. More than three-quarters of its length winds through mountains. One-third of China’s population lives in the Yangtze basin, which is China’s main waterway.

The Amazon River is the second-longest river in the world. It begins high in the Andes Mountains in Eastern South America and runs through the largest rainforest in the world, taking in seven countries as it goes. Finally, it discharges into South Atlantic Ocean.

Although it is not the longest river on Earth, it is, without a doubt, the largest. It can be found along 190 km of the Atlantic Ocean’s shoreline during the rainy seasons and dumps an estimated 209,000 cubic metres of water every second into the Atlantic Ocean. This is a lot of water!

The Nile – known as ‘the father of African rivers’ is the longest river in Africa – and the world (though disputed, as mentioned above). It flows northwards through 11 African countries, draining into the Mediterranean Sea at 2,800 cubic meters per hour.

There are two sources of the Nile River: the White Nile as well as the Blue Nile.

Because of the year-round availability and warm tropical and subtropical climates along its course, the river can support intensive cultivation. The river is also an important waterway for transport, especially during flood season, when roads can often be out of service for long periods.