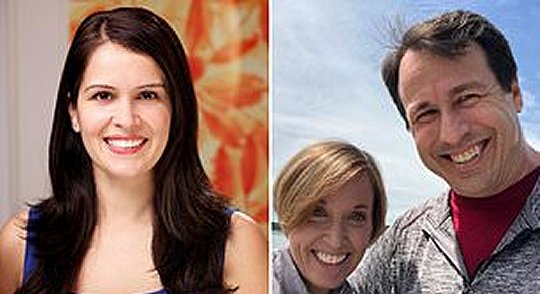 Arlene Guzman Todd is the wife of Jeremy Todd and the woman accused of sexting North Carolina Democratic Senate candidate Cal Cunningham. Guzman Todd is married to veteran Jeremy Todd, 36, and lives in southern California. They have two children together.

National File is rated as an “extreme right” news website by Media Bias Fact Check that largely posts a mixture of “conspiracy and pseudoscience.” The site was founded in 2019. The website’s about section says, “National File is a bold new media project focused on hard news regarding cultural movements, political issues, the tech industry, and other topics pertaining to the New Right.” The section says that the website’s editorial staff is made up of former journalists from Breitbart, The Daily Caller, Washington Free Beacon and Big League Politics.

Jeremy Todd said in a statement via The News & Observer in Raleigh, “I was disappointed to learn about the inappropriate affair between my wife and Mr Cunningham.” Jeremy Todd said that the affair took place while he was separated from his wife. The veteran added, “If [Cunningham is] elected, I can only imagine how misplaced his judgment would be for the people he’s charged to represent.”

1. In One Message, Guzman Todd Told Cunningham to ‘Be Ready to Kiss A Lot’

20 years ago — and today. I’m grateful to be on this journey with my best friend, who warms me with her smile, keeps me on my toes with her wit, and awes me with her determination to make the world a better place. pic.twitter.com/nDfqFR5471

Cunningham has known his wife, Elizabeth, since 1997 and the couple married in 2000. They have two children together.

In one text message to Guzman Todd, Cunningham wrote, “Would make my day to roll over and kiss you about now.” She wrote, “I have flexibility this month – done school, training, big RFPs, etc. So the only thing I want on my to-do list is you.” Cunningham called Guzman Todd “historically sexy,” while she wrote, “pick a day, city, make up an excuse for the fam, ditch a staffer, starch your white shirt and be ready to kiss a lot.”

Cunningham confirmed that the messages were authentic in a statement to The News & Observer in Raleigh. The former state senator added that he would not be dropping out of the upcoming election in North Carolina. Cunningham faces incumbent Republican Thom Tillis in the November vote. On October 2, Tillis confirmed that he was diagnosed with COVID-19.

In one exchange, Cunningham told Guzman Todd that he was “nervous about the next 100 days.”

2. Guzman Todd’s Husband Said in 2016 That His Wife Was a ‘Superhero’ Who ‘Carried Him Through’

Facebook/Junior Achievement of Eastern North Carolina Guzman Todd and her husband pictured together in 2014.

According to Jeremy Todd’s now-deleted LinkedIn page, he served for 15 years in the U.S. Army. Todd studied at the University of Southern California Marshall School of Business and his story was featured in an article on the school’s website in 2016. Todd told the website he had been deployed on five combat missions during his time in the army.

Todd told the website that as a 33-year-old USC student he pledged to the Pi Kappa Phi fraternity, “with his wife Arlene’s blessing.” He paid a heartfelt tribute to his wife in the interview, saying:

My wife carried me through. She is really the superhero in all this. The wives are the unsung heroes of the military, the spouses that deal with everything. Without good wives and family, I don’t think soldiers would be successful in their missions and everything they do.

3. Guzman Todd Says on Her Facebook Page: ‘If You Want to Make God Laugh, Tell Him Your Plans’

Guzman Todd said on her now-deleted LinkedIn page that she is the media relations director for a representative body of cannabis distributors in California. She was formerly an adjunct professor at California State University, where she taught in the communications department. Guzman Todd was quoted in an article on Parent.com regarding the use of cameras in childcare. She said, “I am a big fan of the cameras, they helped provide a feeling of security and allowed me to build trust by watching the caretaker’s interactions with my children.”

At the time of writing, little information is publicly visible from Guzman Todd’s Facebook page. A quote under her profile photo reads, “If you want to make God laugh, tell him your plans.”

Voted early with Elizabeth and Caroline—who cast her first-ever ballot. What a special morning! pic.twitter.com/WKtfmGmDHl

Guzman Todd is a graduate of the University of Southern California and Occidental College. She has a master’s degree in political management from George Washington University and a master of arts in clinical psychology, with an emphasis on marriage and family therapy from Pepperdine University.

An online profile for Guzman Todd refers to her as a “versatile, performance-driven strategic communications and public affairs leader.”

Facebook/Wonder Bread 5Arlene Guzman Todd and her husband in November 2013.

In May 2020, Guzman Todd started a petition on Change.org to garner support for her husband’s campaign to continue his active service in the U.S. Army so that he could qualify for a full pension. She wrote that during his time in the service, Jeremy Todd broke his spine on an airborne operation.

At the time of writing, the petition had more than 10,000 signatures. In an update to the page, Guzman Todd said she was reaching out to politicians on her husband’s behalf but was receiving no replies. Cunningham is an active lieutenant colonel in the U.S. Army. Cunningham has been deployed in Iraq and Afghanistan and was awarded a bronze star medal.